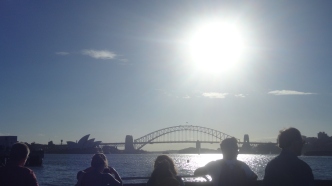 Every good and perfect gift is from above, coming down from the Father of the heavenly lights, who does not change like shifting shadows. James 1:17

Our time in Sydney reminds me of this verse as it’s sadly now coming to a close. Despite our viewing this time as a perfect gift, let me assure you, it has not felt perfect. But I can say, looking back at it now, that God has made all things work together for good. We had been here for about 2 seconds when we realized how difficult this part of our journey would be. Many times we were at a loss for what to do getting into less than comfortable situations. Many times we felt the absence of Gods voice. But for every one of those times we felt lost and alone, there was one more situation in which He came through for us. We can testify that His promises are true even when his voice is quiet. His power is perfect even when our weakness takes hold of us. And even though we fail consistently, His love for us never has.

Our time here was an emotional and spiritual roller coaster that never seemed to end. Beginning with the initial persuasion of finding out that I would be executing a plan that was vastly different from the one I had intended, and ending with beginning our search for a ministry to become a part of back home. I originally had come to understand that God called us here to ready us for our coming time in ministry, and that ended up being true. But the way he did it was a huge surprise. I began to ask Him, “God, what do you want for me? Show me what you want me to do, show me what I should do, and I’ll do it”. Slowly I began to hear from Him. On one particular occasion I felt Him draw me to the thought that I had spent lots of time working on becoming a better Worship Pastor. I then heard his still small voice say that I had been focusing on the “worship” part, and had often missed, the “pastor” part. It became clear that He had brought me and my wife half way around the world to Sydney Australia, taken us away from familiar ministry, from family, and from the comfort of familiar culture to prepare our hearts for the “Pastors” part of “worship pastors”. If you knew the name of the particular church we serve with, you would assume as I did that during our time here our hearts focus would be on the “worship” part, and that God would be preparing us to lead a team musically and spiritually. Upon my first opportunity to serve, I realized quite the contrary. I was put on the New Christians / New People team. Something I realized that I had never actually officially focused on before. It occurred to me that although this is an area I felt comfortable in, it’s was also an area in which I needed growth, and by God’s grace, I can say that I have grown immensely. As a result of taking those first steps with a grateful heart, I’ve been given a spirit of boldness, the likes of which I’ve never known.

2 Timothy 1:7 says: “For the Spirit God gave us does not make us timid, but gives us power, love and self-discipline.” This is NOT just a pastoral idea, this is a CHRISTIAN idea. God’s desire for us when we do whatever we do, is to be empowered by the Holy Spirit in a way that personifies His strength, not ours. Pressing into this thought I began to discover that being bold is partly about having courage, and partly about taking the first step, but ultimately it’s about fully trusting that it’s by His power that all things are made possible. I served in a number of different areas during the weekends and studied the word and read books profusely during the week, something I’ve wanted to do for ages but never had time for. In the time we were here, I’ve been able to read 35 books, which has deeply expanded my basic understanding of God’s nature and what our role on earth is meant to be as disciples of Christ.

I’ve learned a lot about people, and what it means to care for them during this time. One of the things I’ve heard said a number of times but never really fully grasped was the importance of just listening. One pastor put it this way, “There are three rules to remember when building relationships, 1. Listen 2. Listen and 3. Listen”. It amazes me how different a conversations can be when you choose to focus on just listening. It would surprise you to know how many people who come to you with an issue, are only looking to be listened to. Think about it. One of our human characteristics is the desire to be noticed, to be wanted, to be held as great in the eye of the public or adoring fans. Why do you think it is that so many people have an internal desire to be celebrities? It’s because at the core of who we are, is a desire to be significant to someone, to be recognized, and to generally be important. As most of God’s human ideas placed in us can become distorted, his design is often used incorrectly here. God put this desire in us to aid us in caring for each other. When you sit down with a friend, or and person in need, it’s ok to make it all about them, it’s ok to give them your full attention, in fact, it’s that very desire to be special that helps us open up to people who can help us, if only for a brief moment. This desire is brought full circle when we understand that our significance is ultimately in him. When the world says “You don’t matter”, He says “you are His children”. (Galatians 3:26) When the world says “There’s nothing special about you”, He says, “You are my workmanship”. (Ephesians 2:10) When the world says “You failed” He says You are MORE than a conqueror” (Romans 8:37) And when the world says “No one loves you” He says “Nothing can separate you from my love” (Romans 8:38-39).

Gods design in our longing for significance is being used in a way that glorify’s Him when we cherish our time with others, and that’s the name of the game. Granted there will always be people who genuinely need advice, and to them it should always be given with a biblical perspective, but there are many cases when a person just needs to be heard, to be listened to, to be cared for. They may need it for a number of reasons but in the end, if you attempt to fix a problem that does not need to be fixed, you could end up just causing more damage. Just dwelling with a person in the right circumstance in the presence of God can bring significant healing. In the end its God who heals not us, but we are meant to be used to administer His healing touch here on earth in this way, and a listening ear can be a much greater help than our opinion could ever be.

Listening to an angry person won’t always cool them down but there is something to be said about what happens to a persons anger when they discover that you are really attempting to understand them. I’ve found that by confronting anger with an open ear rather than a quick defense, has an extremely profound effect on them. They can see that you are open. They can tell that you care about their issue and more importantly that you care about THEM. “Harsh words stir up anger, but a gentle answer turns away wrath”. (Proverbs 15:1) How many arguments have been fought needlessly simply because neither of the individuals were able to remain calm? Isn’t this what we as Christians have been called to? Isn’t this what Jesus did when his accusers put him on trial? I’m not talking about being passive, I mean we need to say what NEEDS to be said; I’m talking about making a REAL effort to show someone you care by just being there. There’s a difference between listening for the sake of hearing, and listening for the sake of understanding. It’s possible to hear someone, without actually truly hearing their heart.

Waiting for the Holy Spirits guidance requires silence sometimes. At the end of listening there will most likely be an opening to speak the word of God into someone’s life and this requires being connected to the source of all wisdom. It will require diligent prayer, and soft hearted sensitivity to speak Gods heart into a persons life correctly but It’s helpful for everyone, and it glorifies God.

Our time here has taught me many other things but this was a big one. I won’t bore you with every detail but the bottom line is that God did work on my heart. This time has given me a chance to invest in myself, and prepare for a time of fully allowing myself to invest in others. The Bible says, “Therefore, I urge you, brothers and sisters, in view of God’s mercy, to offer your bodies as a living sacrifice, holy and pleasing to God—this is your true and proper worship.” I think this captures what God was saying to me during this season of inward change. It captures the idea that if your heart is to be a pastor you must first be a servant, and takes it a step further by saying that servant-hood honors God in a way that’s pleasing to him, making it worship. Yes worship is a lifestyle but it’s also personified in our actions. Worship leaders, what do you do with your time? Are you investing in the lives of the people around you or are you just leading songs? Our calling is to serve. So serve well, not only by doing what you do with excellence, but serve well by LOVING the people you come in contact with every day. That’s what real ministry is meant to be about.

Australia has been extremely good to us. We saw God move in powerful ways though us and in the lives of our friends and family. He made a way, when it seemed as if there was no way. As our roller coaster life here is beginning to level out a bit and as our season comes to a close I’ll be describing our journey in more detail. We are beginning to seek out the right ministry for us to become a part of in the States. I can say that we are beginning to feel a change in the air which is exciting to say the least. We’ll be wrapping things up here and taking another step of faith in the weeks to come. God has been arranging some amazing things already and I can honestly say that we are excited beyond belief about the months ahead of us. That’s all for now, but If you are interested in following our journey please check back soon and join us as we discover ministry together. Be Blessed!